UN condemns US blockade of Cuba; Brazil, Israel join US to oppose 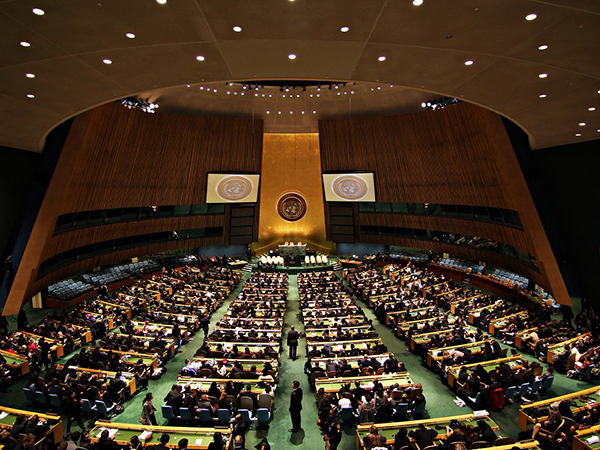 England (UK) Nov 8: The 193-member United Nations General Assembly overwhelmingly voted to condemn the U.S. economic and commercial blockade against Cuba on Thursday, and in doing so shunned U.S. calls to condemn Cuba for its ongoing human-rights violations.
Brazil and Israel were the only two countries to vote with the United States against the resolution. It was the first time Brazil voted against it, according to multiple reports.
Brazil's new president, Jair Bolsonaro, seen as having a good relationship with President Trump, had made his disdain for Cuba clear during his speech this past September to the U.N. General Assembly. At the time, he condemned Cuban attempts to undermine his country and said the Cubans had been "defeated."
The Brazilian mission to the U.N. did not respond to a request for comment from Fox News on Thursday.
Ukraine and Colombia abstained. The Colombian foreign ministry explained its non-vote in a statement, saying Cuba was giving refuge to Revolutionary Armed Forces of Colombia (FARC) terrorists, supported the Maduro regime in Venezuela and made a string of destabilizing efforts in the region.
U.S. Ambassador to the U.N. Kelly Craft acknowledged the resolution would pass but made clear the Trump administration would oppose it, in a speech shortly before the vote.
Craft told member states, "Like all nations, we get to choose which countries we trade with. This is our sovereign right. So, it is worrying that the international community, in the name of protecting sovereignty, continues to challenge this right. But, what is even more concerning is that every year, this body entertains the claim that the Cuban regime has no other choice than to abuse its own people in response to the embargo."
Craft listed a litany of human-rights abuses by Cuba that she said went against the Universal Declaration of Human Rights - a document to which the communist country is a signatory. Citing regime restrictions on its doctors working in foreign countries and a report that estimated 50,000 journalists, activists, and others had been arrested arbitrarily since 2010, Craft highlighted the plight of one such activist.
"Just this past October, human rights defender Jose Ferrer and other advocates were arrested on fabricated charges. Mr. Ferrer has not been seen since. Our embargo does not force the Cuban regime to arrest independent journalists and human rights defenders without cause. This is a choice, freely made."
Before the vote, Cuba's Foreign Minister Bruno Rodríguez Parrilla complained the blockade had affected all Cubans and claimed it went against a 1948 convention on genocide.
"The blockade has caused incalculable humanitarian damages. It is a flagrant, massive and systematic violation of human rights, it qualifies as an act of genocide... there is not one single Cuban family who has not suffered consequences of this."
Speakers from a regular group of anti-American allies, including Venezuela, China, North Korea, Syria and Iran, spoke in support of the regime in Havana.
Iran's Deputy U.N. Ambassador Eshagh Al-Habib called out the U.S., claiming it demonstrated an "expansionist and arrogant approach."
North Korean U.N. Ambassador Kim Song denounced the blockade, calling it "a crime against humanity." Venezuela's Foreign Minister Jorge Arreaza called the blockade "criminal," and condemned it as "an affront" to the United Nations.
The final vote was 187 in favor and three against with two abstentions, while Moldova did not vote.
U.N. General Assembly resolutions are not legally binding nor enforceable. Following the Obama administration restoring diplomatic relations with Cuba in 2015, the U.S. did abstain on the blockade vote in 2016, but the Trump administration has since reverted to the usual U.S. practice of voting against the resolution.
After the vote, Craft read a statement to reporters but did not take questions.
"You know, the ugliest part of today, with this annual affair in the General Assembly, that people can peddle this fiction that the Cuban regime is powerless..." Craft continued, "They could most certainly help the people there that are sick by allowing their physicians to heal the people in their own country and to allow for freedom of expression."
Source: Fox News