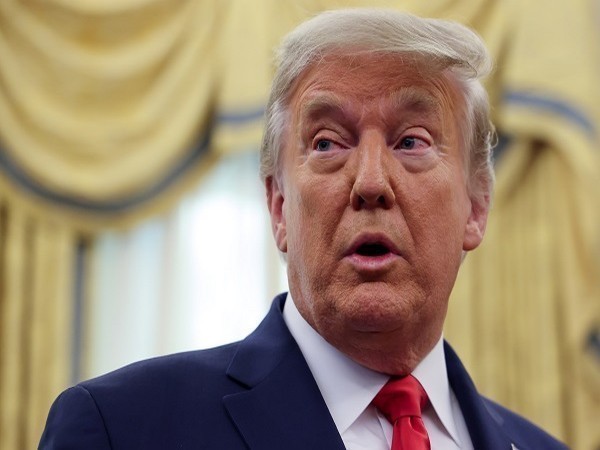 Washington (US), June 11: Former U.S. President Donald Trump has returned to the spotlight, underscoring the possibility that the bombastic billionaire will make a run at the White House in the next U.S. elections.
On Monday's Varney & Co. on Fox Business News, Trump spoke on a wide range of subjects, and hinted he might run for president during the next elections, although he did not explicitly announce his intentions.
Trump said he would consider choosing Florida's Governor Ron DeSantis as a running mate in 2024, should he decide to run.
"I would certainly consider Ron," Trump told Fox Business host Stuart Varney in a phone interview broadcast on the show.
That came on the heels of a weekend rally in the U.S. state of North Carolina, where Trump made his first in-person appearance in months.
"He does want to run in 2024, if his health and legal situation can permit it," Clay Ramsay, a researcher at the Center for International and Security Studies at the University of Maryland, told Xinhua.
Indeed, the former president is 74 years old, and the next elections are nearly four years away. Moreover, lawsuits aimed at holding Trump personally and financially responsible for the Jan. 6 Capitol riots are mounting.
Among other lawsuits, Democratic member of Congress Eric Swalwell is suing Trump, arguing that the former president interfered with his jobs by pushing what he called false accusations that the election was illegally stolen.
The former president has denied any wrongdoing, and experts said he will likely argue that the statements made during his Stop the Steal campaign -- in which he accused Democrats of cheating in the election -- were free speech protected by the First Amendment.
Brookings Institution Senior Fellow Darrell West told Xinhua that Trump is doing interviews and speeches to keep his name out there, so he can continue to raise funds from his base, as he is incurring large legal fees.
Ramsay said the fact that Trump picked moderate-conservative Varney's show for Monday's interview suggests Trump, at least for now, is more open to suggestions from the professional political operatives that are part of his retinue.
"What they want is to get the conservative fragment comfortable, the ones who are still Republicans but are sometimes unnerved by Trump," Ramsay said.
Christopher Galdieri, assistant professor at Saint Anselm College, told Xinhua that the interview and rally are clear signals that the former president at least wants people to talk about him as if he's running in 2024.
"He has the advantage of being the instant front-runner if he does run ... So until he makes a definitive statement, this sort of thing keeps people talking," Galdieri said.
In March, Trump suggested he may run again in 2024, although he did not say so explicitly.
"Who knows?" Trump said at the Conservative Political Action Conference (CPAC) in the U.S. state of Florida.
The annual CPAC straw poll showed that 95 percent of those attending the conference said Republicans should continue along Trump's policy lines, and 68 percent of conference goers said Trump should run in 2024.
A Quinnipiac poll from last month showed 85 percent of Republicans said they wanted candidates who agree with Trump on issues. Two-thirds of participants in that poll said they want the former president to run again in 2024.
Recently a Facebook oversight board upheld the decision to ban the former president from the social media platform. The former president has also been booted off Twitter, and that could prove to be a hurdle in communicating with large groups of potential voters, experts said.
Another hurdle will be the economy, which is expected to boom for at least the next year, after 2020 saw the deepest economic dive since the Great Depression nearly a century ago. The economy is expected to grow 6 percent to 7 percent this year, and that will put President Joe Biden on solid footing politically, experts said.
Trump is perhaps the most polarizing political figure in decades, although experts said he is a mere reflection of the deep political divisions of voters nationwide. He is particularly a symbol of the cavernous gap between rural and urban Americans, experts said.
Anna Bosch, in IT management in the DC area, told Xinhua, "I think it's great" if Trump runs, but added that she was concerned about Trump's age.
Connie Bauers, a housewife in her late 50s residing just outside Washington DC, told Xinhua she would not vote for Trump, and would cast her ballot for Biden, as she did last November.
Source: Xinhua