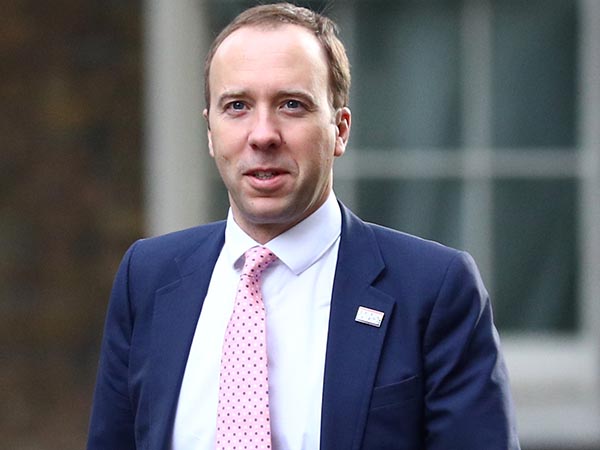 London (UK), June 28; Public outrage remained on Sunday as British Health Secretary Matt Hancock, the politician in the driving seat in Britain's battle against COVID-19, resigned Saturday for breaking a social distancing rule he imposed on England.
British Prime Minister Boris Johnson acted promptly Saturday evening to appoint former Chancellor of the Exchequer Sajid Javid as Hancock's successor.
Hancock's key job in Johnson's top team of ministers was thrown into doubt after The Sun newspaper on Friday published photographs of the health secretary kissing one of his key aides, a married woman, at the British Department of Health's London HQ reportedly during office hours in May.
Hancock's resignation came after embarrassing footage emerged of the health secretary in a clinch with his aide Gina Coladangelo on May 6, when the public were still being advised not to hug people outside their household, the Guardian newspaper reported.
But what doomed Hancock's cabinet career was outrage from politicians and the public that the embrace broke a legally-enforceable social distancing rule he had imposed across the country to contain the pandemic.
At the time when Hancock decided to quit on Saturday evening, official figures showed a further 18,270 COVID-19 cases in Britain were recorded in the latest 24 hour period, with a further 23 deaths. More than 1,500 people are currently in British hospitals being treated for COVID-19.
Britain is the first European country that passed the grim mark of 100,000 coronavirus-related deaths.
During the pandemic, Hancock has regularly appeared on Downing Street virtual briefings, detailing restrictions that must be followed in the fight against the virus.
Political expert Iain Begg from the London School of Economics and Political Science (LSE) told Xinhua that despite that Hancock "being the minister most able to claim credit for the vaccine successes, he was undone by the charge of hypocrisy."
"UK voters would have been tolerant of the news of his relationship, but resent the idea of leaders breaking rules. One rule for us and another for them plays very badly with citizens."
Ruling Conservative Party lawmakers said they had been bombarded with furious complaints about Hancock's behavior from voters in their constituencies.
Keir Starmer, leader of the main opposition Labour Party, said Saturday night that Hancock was right to resign, adding that Johnson should have fired him.
Ed Davey, leader of the minority opposition party Liberal Democrats, said on his social media site: "Matt Hancock's legacy as Health Secretary will be one of cronyism and failure."
British newspaper engaged in a frenzy of coverage about his relationship with Coladangelo who worked as a key aide to Hancock at the British Department of Health and Social Care. The married mother of three also resigned from her government job.
For the second day in succession, the front pages of Britain's national newspapers were dominated by the Hancock story.
The Observer newspaper said Sunday that Hancock's resignation was a heavy blow to the authority of the prime minister, who had stood by the 42-year-old minister following his apology.
The Sunday Telegraph, in its commentary, said: "Hancock made the right decision to resign on Saturday...The most damaging accusation levelled against him was one of hypocrisy and it made his position untenable."
"As health secretary, he had taken it upon himself to intervene in the personal lives of the public while breaking lockdown rules himself."
In a poll of its readers, the Telegraph said 93 percent had wanted Hancock to resign or be fired.
In his resignation letter to Downing Street, Hancock said: "We have worked so hard as a country to fight this pandemic. The last thing I would want is for my private life to distract attention from the single-minded focus that is leading us out of this crisis."
"I want to reiterate my apology for breaking the guidance, and apologise to my family and loved ones for putting them through this. I also need (to) be with my children at this time."
The prime minister's letter, written in response to Hancock's resignation, said: "You should be immensely proud of your service."
Hinting that Hancock's political career was not over, Johnson added: "I am grateful for your support and believe that your contribution to public service is far from over."
However, anger from citizens around the country, especially the bereaved families, is far from over.
The campaign group, COVID-19 Bereaved Families for Justice, said in a statement: "Up and down the country, bereaved families have been doing everything they can to follow the rules and prevent further loss of life. But it's clear Matt Hancock thought that 'hands, face, space' was a rule for everyone else."
"For bereaved families to know that the man responsible for public health in this country, was ignoring the rules whilst we were unable to hug friends and family at our loved ones funerals, is heartbreaking."
Care worker Janet Haycock from Cheshire in northern England told Xinhua: "Everyone I know has carefully been following the rules that Hancock insisted we must follow. For him to ignore his own rules is a big slap in the face for all of us. He just had to go."
Hancock's successor Javid said Saturday he was honored to have been asked to serve as British Secretary of State for Health and Social Care at a critical time. "I look forward to contributing to our fight against the pandemic, and serving my country from the Cabinet once again."
His appointment was broadly met with approval in political circles. Until 16 months ago he was Chancellor of the Exchequer, considered one of the top offices of state in the British government.
But he dramatically quit after just six months at 11 Downing Street, the official residence of Britain's Chancellor of the Exchequer, after reportedly being told he had to fire all his advisers if he wanted to keep his job.
Source: Xinhua