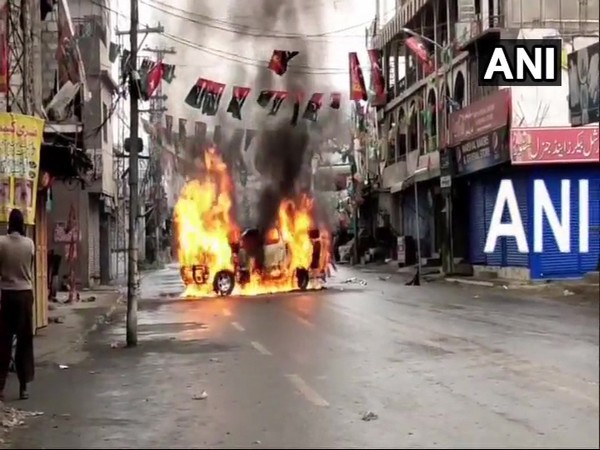 By Dr Amjad Ayub Mirza
Glasgow [UK], December 10 (ANI): As the Indian Union Territory of Jammu and Kashmir successfully completed phase five of District Development Council elections that no doubt are a landmark achievement of the BJP government regarding devolution of power in the former state, people of Pakistan-occupied Gilgit Baltistan have begun to see the results of their November 15 elections bearing fruits. However, they taste sour, to say the least.
To start with the Pakistan Tehreek-e-Insaf (PTI) cabinet in GB does not have a woman member and is totally a male-dominated 'selected' body. On its first day, it gave approval for the sacking of 100 government employees in the name of cutting state expenditure but conveniently ignored the large entourage of the chief minister who travels to the Astore district in a 30-vehicle long convoy, adding unwarranted pressure on the coffers of the GB treasury.
On the occasion when a totally male-only-cabinet was being sworn in, the rest of the occupied territory was facing the worst ever load shedding which in some cities lasted for more than 20 hours. "There is no sign of the newly designated minister for municipalities Mushtaq Hussain who hails from our district and we are stuck in the middle of a dark and bone-chilling cold night", complained a resident of Ghanche district.
Unlike previous practice when tenders related to projects in Gilgit-Baltistan were launched in the occupied territory, this time around the tenders of two important projects were released in Islamabad by the federal minister for Kashmir Affairs and GB, Ali Ameen Gandapur, but more importantly under the watchful eyes of the Pakistani military establishment.
These projects include the construction of a four-megawatt power project in Challas which will cost a whopping one billion 26 crore rupees and the construction of a polytechnic institute in Skardu worth 37.8 crore rupees. No wonder the opposition parties in GB are complaining that the PTI government is stripping them of whatever trivial rights they had. The same PTI whose Federal Minister for Kashmir Affairs and GB while addressing an election rally in the region boosted of investing 400 billion rupees for regional development.
The next day, in the dead of the night following government orders, dozens of shops in Gilgit city were demolished without prior warning thus damaging millions of rupees of stock in the process. In a hurriedly called press conference trader associations have demanded compensation for the losses or else they will launch a protest campaign right across the occupied territory.
Smelling the evil intentions of the PTI government, Gilgit Baltistan Awami Action Committee's leader announced that if the new government attempts to introduce new taxes they will have to face the wrath of the population as Awami Action Committee will retaliate with vengeance. The Committee has called for a full board meeting to be held next week.
The airfare from Karachi to Islamabad is Rs 12,000 for just under three hours flight. However, a 45 minutes flight from Skardu or Gilgit will cost you Rs 18,000 to Rs 20,000 and believe me people are not happy about it at all especially after the PIA license scandals that have forced the EU and UK to ban PIA fights to enter their airstrip. To put one's life at risk for such a steep price in the hands of a PIA pilot who might not even have a genuine flying license is asking for a bit too much. PIA continues to charge the same fare despite election pledges to reform the price scheme.
Taking cue from the lack of female representation in the PTI's GB cabinet, Gilgit-Baltistan women held a vociferous protest at the gates of the GB legislative assembly calling for action against sexual harassment and asking for secret cameras to be placed in colleges, universities and in offices. This is the first time that the women in GB have come together to fight for gender rights.
And then it was the turn of the students from the Karakoram University who protested against poor exam results blaming the authorities for lack of proper online teaching facilities and a very weak Internet network connection in the region that has been the main cause for not being able to prepare amidst corona pandemic lockdown social environment.
Meanwhile, as the hate and disinformation campaign by the military establishment's NAZI style propaganda machine called ISPR which is based on lies marinated in the so-called two-nation theory of Muhammad Ali Jinnah, the guillotine of the blasphemy law, Schedule Four and Anti-Terrorism Acts continues to hang over our people's neck ready to be dropped in an instant if need be.
There is no hope of any betterment whatsoever under the current PTI government in GB. The military establishment has taken over full control of the running of the CPEC projects in the region and any dissent with being crushed in an instance that would be quicker than that of a blink of an eye.
Under the present circumstances, only those who have trained their minds to become bulletproof to the targeted jihadist cultural sniper attempts to brainwash our people into believing that India is our enemy and Pakistan our saviour and protector will be able to remain sane and survive through this final period of oppression and plunder before we join other fellow Indian citizens in Jammu Kashmir and Ladakh.
In conclusion as our brothers and sisters enjoy a better life and as the Indian union territory of Jammu and Kashmir takes big strides towards democracy and development, we who are living under the illegal occupation of Pakistan in PoJK and PoGB continue to suffer as oppression and plunder of our people and resources continues unabated after the November 15 elections or shall I call it 'selections'?
Disclaimer: The author of this opinion article is Dr Amjad Ayub Mirza, who is an author and a human rights activist from Mirpur in PoK. He currently lives in exile in the UK. (ANI)