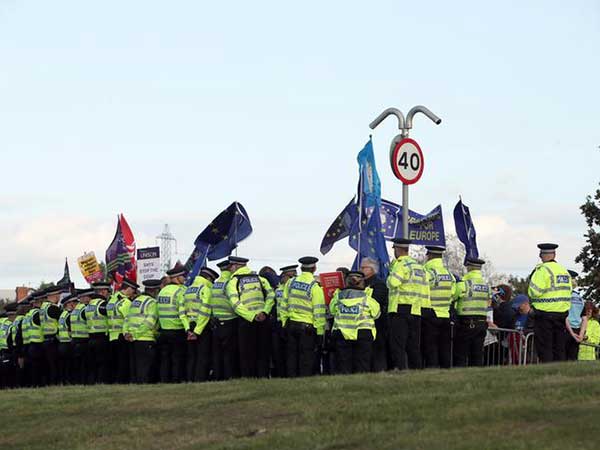 London (UK) September 07: A chief constable in West Yorkshire said he was "disappointed" after UK Prime Minister Boris Johnson delivered a speech on Brexit flanked by officers.
Johnson was surrounded by new police recruits during a speech that was supposed to be about a recruitment campaign for 20,000 extra officers.
But the speech also turned to Brexit with Johnson stating that he would rather be "dead in a ditch" than ask for a Brexit delay.
The West Yorkshire Police said on Friday that the speech was only supposed to be about recruitment.
"We had no prior knowledge that the speech would be broadened to other issues until it was delivered," Chief Constable John Robins said in a statement released by the West Yorkshire Police.
Robins said he was "disappointed to see [his] police officers as a backdrop to the part of the speech that was not related to recruitment."
West Yorkshire's Police and Crime Commissioner Mark Burns-Williamson, who is a member of the Labour party, had also criticised Johnson, saying his speech was a "last-minute hijacking" of a visit that he said appeared to be "blatant electioneering".
"There is no way police officers and staff, who clearly thought it would be all about police recruitment announcements, should have formed a backdrop to a speech of that nature," Burns-Williamson said.
The speech had started out about police recruitment but Johnson soon turned to the subject of Brexit.
"I hate banging on about Brexit. I don't want to go on about this anymore," Johnson said early on in the speech.
Chief Constable Robins said he was pleased that the police force was "chosen as the focal point of the national recruitment campaign launch" but that the recruitment was "overshadowed by the media coverage of the other events."
The speech came just one day after the House of Commons passed a bill that would force Johnson to ask the EU for a Brexit extension in the event that there is no deal by the end of October.
Source: Euro News