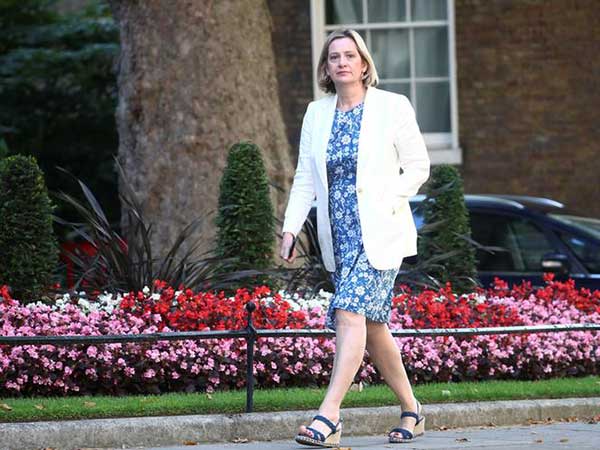 London (UK) September 08: Amber Rudd, one of the few Remain-supporting ministers in Boris Johnson's Cabinet, resigned on Saturday evening, accusing the British leader of having conducted an "assault on decency and democracy" by expelling rebel lawmakers from the party.
The Work and Pensions Minister also said she has surrendered the Conservative Whip meaning she will now sit as an independent lawmaker in the House of Commons.
"This has been a difficult decision," Rudd, who was one of only two ministers to keep their job when Johnson succeeded Theresa May in Downing Street in late July, said in her letter to the Prime Minister.
She said that although she initially accepted that the option to leave the bloc without a deal had to remain on the table as a negotiating strategy to secure an agreement, she "no longer believe(s) leaving with a deal is the government's main objective."
"The government is expanding a lot of energy to prepare for 'No Deal' but I have not seen the same level of intensity go into our talks with the European Union who have asked us to present alternative arrangements to the Irish backstop," she wrote.
The backstop is an insurance policy to prevent the creation of a physical border in Ireland which is seen as necessary to preserve peace on the island.
'Political vandalism'
Rudd, also a former Interior Minister, went on to criticise Johnson for sacking 21 Conservative lawmakers from the party earlier this week after they ignored the whip and voted against the government to back a bill that would prevent the country from leaving the EU without a deal on October 31.
She described "the culling" as "an assault on decency and democracy" and said it "has stripped the Party of broad-minded and dedicated Conservative MPs."
"I cannot support this act of political vandalism," she wrote.
Euronews has contacted Downing Street for a comment.
Boris Johnson's difficult week
Rudd's resignation capped an extraordinary week in British politics during which the new leader suffered several bruising parliamentary defeats and the resignation of his own brother, Jo Johnson, as MP and minister for science and universities.
Opposition lawmakers, aided by rebel Conservative MPs, fast-tracked legislation to prevent a hard Brexit and then rejected Johnson's call for an early election.
The bill was then passed by the Lords on Friday evening and is expected to become law on Monday when it is given Royal Assent.
'Broken' politics
Ian Lavery, an MP from the main opposition Labour party, said Rudd's resignation demonstrates that "the Prime Minister has run out of authority in record time and his Brexit plan has been exposed as a sham."
"No one trusts Boris johnson. Not his Cabinet, not his MPs, not even his own brother," he added.
Ian Blackford, leader of the Scottish National Party (SNP) in Westminster, said that Rudd's departure from cabinet signalled that "Boris Johnson's Tory government is on the verge of collapse - with no majority, no mandate, and no right to pursue its reckless plans to impose an extreme Brexit."
"When so many senior Tories cannot abide the actions of this right-wing, extreme Brexit government - the question is why on earth should Scotland be expected to?" he added.
Jo Swinson, leader of the Liberal Democrats party, which on Saturday welcomed former Labour and Change UK MP Angela Smith in its ranks, said that "Amber Rudd's resignation is yet another blow to Boris Johnson and his reckless plans to crash the country out of Europe without a deal."
"His disregard for the country's interest and those who are meant to be his colleagues is symbolic of how broken our politics has become," she also said.
Source: Euro News